How the Board Works, and how to Setup Yours

Since boards haven’t gone on sale yet (and the production board is not quite finished), I haven’t made detailed and easy-to-follow instructions yet. However, the process only requires a Micro-USB cable, some software downloads, and entering your WiFi information to work.

The main code (.ino) file sets a number of configuration values, most of which will break the board’s functionality if they are changed. However, the configuration values for each line (starting around line 60) have their LED color defined with a <line_code>_HEX_COLOR 32-bit WRGB hex value, which you can change to whatever colors you want. In addition, all_lines array, defined right before the setup() function defines the order for what color a station LED will turn if two trains from different lines are “at” the same station (going opposite directions, one right behind another, etc.). You can change the order if you’re partial to one line over another.

Boards can either be powered through a Micro-USB cable OR 3 AA batteries. While you must use a USB cable connected to a computer to load the software, you can then use a cable from a phone charger or other direct power supply as long as it supplies power at (or near) 5 Volts (more than 5V may permanently damage the chip or LEDs on the board).

You can also power the board using 3 AA batteries, which are controlled with an “On/Off” switch. If using batteries, make sure the power switch is set to “Off” while inserting the batteries. For additional protection, begin inserting batteries from the bottom up, as the bottom battery grounds the board while the top battery connects to power. Providing power via the top battery without a connection to ground may also cause permanent damage to the board.

Finally, DO NOT CONNECT THE BOARD TO USB AND BATTERY POWER AT THE SAME TIME. This will provide far more power than the chip or LEDs are able to handle, and again may cause permanent damage. While it is possible to leave batteries in the board with the switch turned off while connected to a USB power supply, I recommend taking at least the top battery out to ensure extra voltage isn’t supplied to the board. 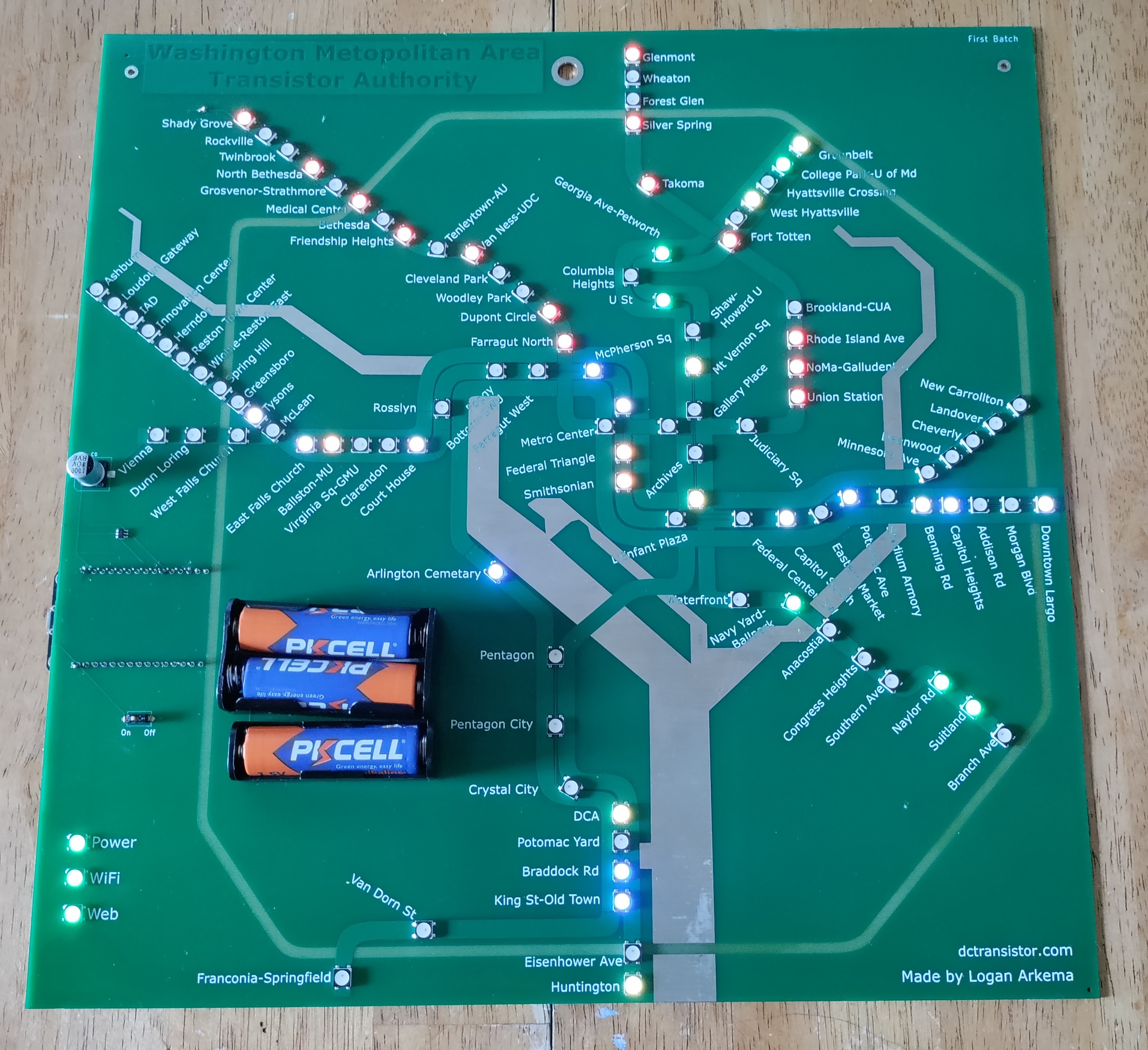 Boards work by getting real-time train positions WMATA makes available through it’s API, and turning on LEDs for the station a train is arriving at or has most recently left from.

When the board turns on, it turns all LEDs off except the power LED (some other LEDs may flash on with instructions from before the board turned off), then attempts to connect WiFi. At this point, the WiFi LED will turn yellow until it successfully connects (which may take a few seconds), and then it will turn green. The board then attempts to connect to the WMATA API, and the Web LED will turn yellow until it successfully receives the first batch of train positions.

WMATA provides a list of every train in service, the line it’s on, and which circuit (i.e. track segment) it’s currently on. For each train, the board checks which stations the train is between, including if it’s arriving at a station (currently using two circuits before a station as “arriving”); and records that the train’s line has a train at that station. After going through all active train positions, the board goes through all stations and sees if any line has a train “at” each station, setting the LED for that station to the line’s color if there is and turning the LED off if not. The board then updates all LEDs to show the new positions, and waits twenty seconds before getting new train positions from WMATA.

Important: Train positions are taken directly from WMATA, and are only as accurate as the location data WMATA provides. In particular, WMATA may report a train’s position “at” a station that is closed for repairs, or “at” the station before a series of closed stations long after a train has left. Further, a circuit is not a uniform measurement, so while a train may move on the board because it is two circuits away from the station it may not be close enough for an “ARR” message to appear at a station. Finally, the board has LEDs for stations that are not yet open as of July 2022 (i.e. Potomac Yard and the Silver Line Expansion), and therefore do not turn on. I will try to release software updates as soon as the stations open, but make no guarantees on timeliness. You are responsible for updating your board with any new software, though I will try to maintain voluntary notification emails.

There will likely be some differences with the prototype board and the production board. You can see some of the (likely) changes on the waitlist page and recommend your own.